Unskilled transition is one of the basic skills of every photographer. How to make paragraphs flow smoothly after shooting a scene?  This is where the skill is tested.  Although there are fade-in and fade-out, freeze frame, overlapping and other techniques for connecting, skillful photographers generally give up this approach and choose no techniques for transition.

1. What is unskilled transition?

Skillless transition is a direct switch with no special effects and additional effects of optical skills. The inner connection between upper and lower shots in content and shape is used to transform time and space and connect the scene so that the lens connection and paragraph transition are natural and smooth without any additional skill traces.  From the perspective of the audience’s visual psychology, the rational use of unskilled transition means is also based on two basic situations of paragraph transition:

one is focusing on the internal coherence of the shot transition, not the psychological sense of partition of the space transition;  The second is to emphasize the obvious changes between paragraphs, strengthen the psychological partition.  It is not easy to make use of the logical connection between the upper and lower shots in the content and the coordination and contrast in the modeling factors to transform paragraphs and strengthen the internal structure of the work, so as to achieve the effect of flowing like water, or melodic or interesting.

(1) Use similarity factors to transition

The upper and lower shots have the same or similar body image, or the objects have a similar shape, overlapping position, consistency in the direction of motion, speed, color, and other aspects, so as to achieve the purpose of visual continuity and smooth transition.

(2) Take advantage of the audience’s mindset

Taking advantage of people’s automatic assumption of the psychological set, the use of diversion means often can cause the illusion of connection, so that the transition is smooth and interesting.

The relationship between the shape and content of the upper and lower shots, the continuity of action, or the coherence of the plot is used to make the transition of paragraphs orderly. Sometimes, the illusion of undertaking can also be used to create an illusion, so that the scene transformation is smooth and dramatic.  It is a common way and basic skill to find the following factors in progressive editing.

The so-called occlusion refers to that the lens is temporarily blocked by an image in the screen. According to the different occlusion methods, it can be roughly divided into two types of situations: one is that the main body is oncoming to block the black camera lens, forming a temporary black picture;  Second, the foreground in the picture temporarily blocks other images in the picture and becomes the only image covering the picture.

For example, in the shot on the street, the cars flashing in the foreground may block other images at a certain moment.  When the image is blocked or completely blocked, it is also the lens switch point, which usually represents the change of time and place.  Subject blocking usually gives a strong visual impact, creates visual suspense, and speeds up the narrative rhythm of the picture by omitting the cut scenes.  A typical example is: in the previous paragraph, the subject at point A is facing towards the black lens, while in the next paragraph, the subject is facing away from the lens and has reached point B.

This method is suitable for the conversion of large paragraphs by using the huge contrast and contrast between the front and rear shots in terms of field difference and dynamic and static changes to form obvious paragraph intervals.  Its common way is the use of the bipolar scene, because of the wide contrast between the front and back shots in the scene, can create obvious interval effect, paragraph sense is strong, it belongs to a shot skipping, help to strengthen the rhythm.

In documentaries, the two-pole camera transition is an effective means to distinguish the level of paragraphs. It can largely omit the irrelevant process and give the audience a strong intuitive feeling by changing from moving to static or changing in static.

With music, sound, commentary, dialogue, and the picture of the cooperation to achieve the transition.  It is the basic means of TV editing to use commentary to connect the preceding and the following and run through the upper and lower shots.

Although music, sound, and dialogue are different sound forms with different properties and functions, they all have the following ways in terms of transition effects:

First, use the harmony of sound transition to naturally transfer to the next paragraph, in which, the main way is the continuation of sound, sound in advance, overlapping of sound similar parts before and after the paragraph.  The visual pulsation of picture conversion and paragraph change is weakened by the attraction of sound.

Second, the use of sound echo relationship to achieve a large-scale transformation of time and space.  For example, in investigative programs, different objects or even characters with different views are often used in the same question. In editing, echoes in the answers can be used to connect different times and spaces, or even cut out the effect of fighting each other.

There are many ways to transfer, such as using subtitles, using emotions, etc., whether the use of skilled transfer (special effects connection) or no skilled transfer (direct switch), the premise of reasonable use is based on the performance characteristics of various skills, combined with the content expressed, accurately master the montage language.

These techniques do not cover all methods of connecting shots, transforming time and space, and separating paragraphs. They can be constantly created and developed, and there is no superiority or superiority in these techniques themselves, as long as the method suitable for content, genre and style are appropriate.

Take you through the basics of telescopes

The telescope is a kind of visual optical instrument used for observing distant objects. It... read more

The first practical telescope was a refractor with a glass lens, discovered by Galileo in... read more

What do the two numbers on the telescope represent?

Discover the world of hand-held telescopes

If you're looking for a telescope that gives you the distance you need without weight... read more

Why use an 85mm lens for portrait photography?

If you are a professional portrait photographer, the 85mm lens is undoubtedly the most commonly... read more 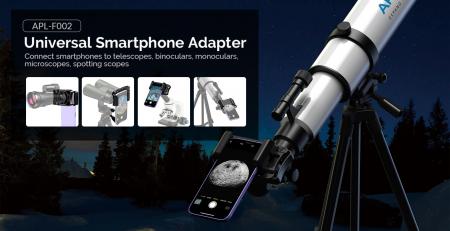 Recently, Apexel launched a universal smartphone adapter (APL-F002), it connects smartphone to any eyepiece from 23mm to... read more

There are three main techniques for using telescopes

The definition of the telescope can be said to be varied, some people think it... read more

Which is better, binoculars or monoculars?

5 Reasons to Use Monoculars

Monoculars are a relatively low-power optical element with a similar aperture to binoculars.This is something... read more

How do I keep the image stable with binoculars？